The one-and-a-half-story, front-gabled house, built around 1922, was known as the Elm Cottage for the large elm trees in its yard. An arched double-leaf entrance centered on the façade is similar to those constructed by Jules Körner at the Parks-Richmond House and the William Whitted House. 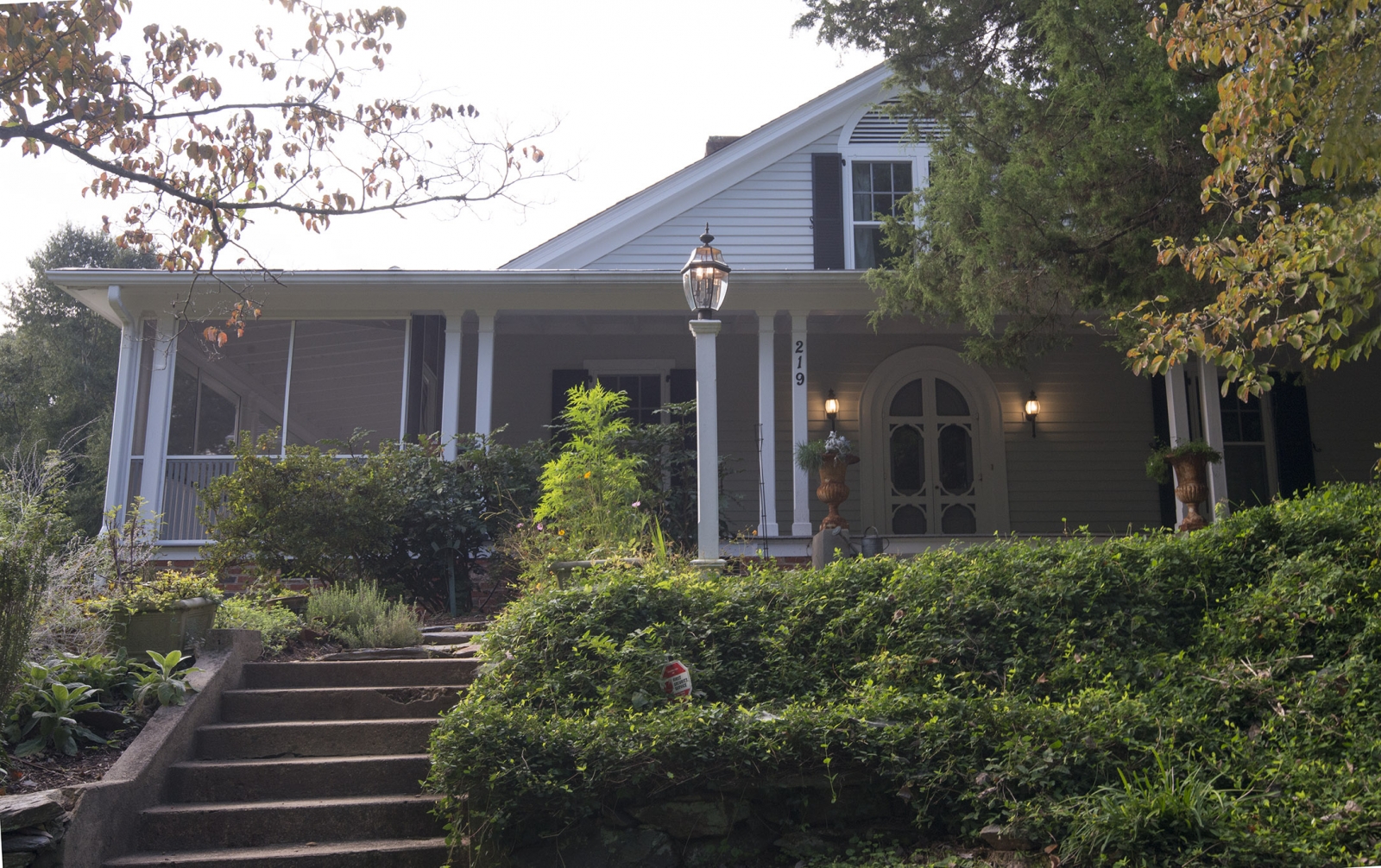 (Below in italics from the National Register nomination; not verified for accuracy by this author)

The one-and-a-half-story, front-gabled house, built around 1922, has been dwarfed by the construction of a large, one-and-a-half-story rear addition with dormers and an attached one-and-a-half-story garage at the southwest. The front-gabled house is three bays wide and double-pile with vinyl siding, replacement windows with aprons, and an interior brick chimney. An arched double-leaf entrance centered on the façade is similar to those constructed by Jules Körner at the Parks-Richmond House and the William Whitted House. A shed- roofed porch extends across the façade and wraps around both side elevations of the original section, supported by grouped square posts. The left (east) side of the porch has been enclosed with screens. The porch terminates at the rear wing, which is wider than the original house and has gabled dormers on the façade and a wide, shed- roofed dormer across the rear (south) elevation. A hip-roofed porch on the right (west) elevation of the rear wing connects to a one-story, side-gabled hyphen that extends from the right rear (southwest) corner. This hyphen connects to a one-and-a-half-story, cross-gabled garage wing with a projecting, shed-roofed bay on the façade and a shed-roofed porch supported by grouped posts that shelters the garage doors on the right elevation. The large lot has historic hardwoods and is terraced down to Queen Street. County tax records date the building to 1922 and the additions date to 2011.

From Gardens of Old Hillsborough, 1971 (written by Miss Annie Cameron.)

This place has always been called "Elm Cottage," because of the four beautiful elm trees, three on the eastern slope of the yard, and one at the back of the house. Also at the back was a lovely yellow Jessamine, and still another, which climbed up into the nearby damson trees.

On the east side of the house, Aunt Emma had a large bed of phlox, pink and white. In the warm sunshine their perfume was delightful, and the lovely butterflies coming and going were a joy to behold.

Not too far from the phlox bed, in the early spring, there was a long row of bright yellow jonquils eagerly watched to see which one would appear first. Hyacinths and narcissus followed fast. There was a bed of lillies of the valley near one of the large mulberry trees, but it didn't get enough sun. Violets and sweet Williams and iris (at that time called "blue flags") and tulips graced their beds. Later, dahlias came too.

We had several different kinds of roses, and the one Grandfather liked best, we always called "Grandfather's Rose." We had two of these. The one he was so fond of is gone now, but the other one is still growing and blooming. It is of a lovely shade of pink and smells very sweet. It keeps on blooming through the summer. One of the earliest roses in the spring is "Chloris," a Noisette, a lovely pink rose, which hangs down in graceful sweeps and almost touches the ground. Nearby is "Old Crimson China." It stands close to an elm tree, old, but healthy, and reaches up long slender branches which ding to the tree. The "Old Blush China" rose grows very close to the crepe myrtle, and leans against some of its lower branches, but would not be called a running rose. On the east side of the house are Seven Sisters and down the hill a mass of Crimson Rambler brightens the hillside.

We were very fortunate in having several shrubs, Japonica, winter-jessamine (sometimes called "first breath of spring"), crepe myrtle, snow balls, forsythia with its golden bells, spirea, mountain ash (sometimes called "Old Man's Beard"), sweet shrubs (the school children often called them "sweet bubbies") and last, but not least, the "smoke bush." As a child, the smoke bush fascinated me, somehow, it seemed to have magic powers.

In the front yard there was a row of altheas, pink and white, and up to the living room window ledge climbed a lovely mass of blue bells, so beautiful and fragrant. Just a few steps down the hillside stood the much loved mimosa tree covered with little pink "powder puffs" and filling the air with sweetness. We also had a very interesting vine called the Cross Vine. There is a good deal of information about it. It is a vine native to the woods of Virginia, south to Florida and westward. It was first recorded in Virginia in 1653, and plants were sent to England in 1710. The flowers are yellow to orange trumpets with a bell-shaped top. They are often marked with lavender within. If the stem is cut through, a cross will be seen.

There was a lot of ivy and periwinkle around the yard. Also there were fruit trues, apples, peaches, plums, pears, grapes, and figs. On the whole, a very happy place to live.