Sheppard Strudwick, owner of the Bellevue Mill in West Hillsborough, built this house on the former site of the William Bingham house, which he moved east on Union Street. During the 1960s, the owners gave it the name "Tamarind," after the Poe sonnet "To Science." 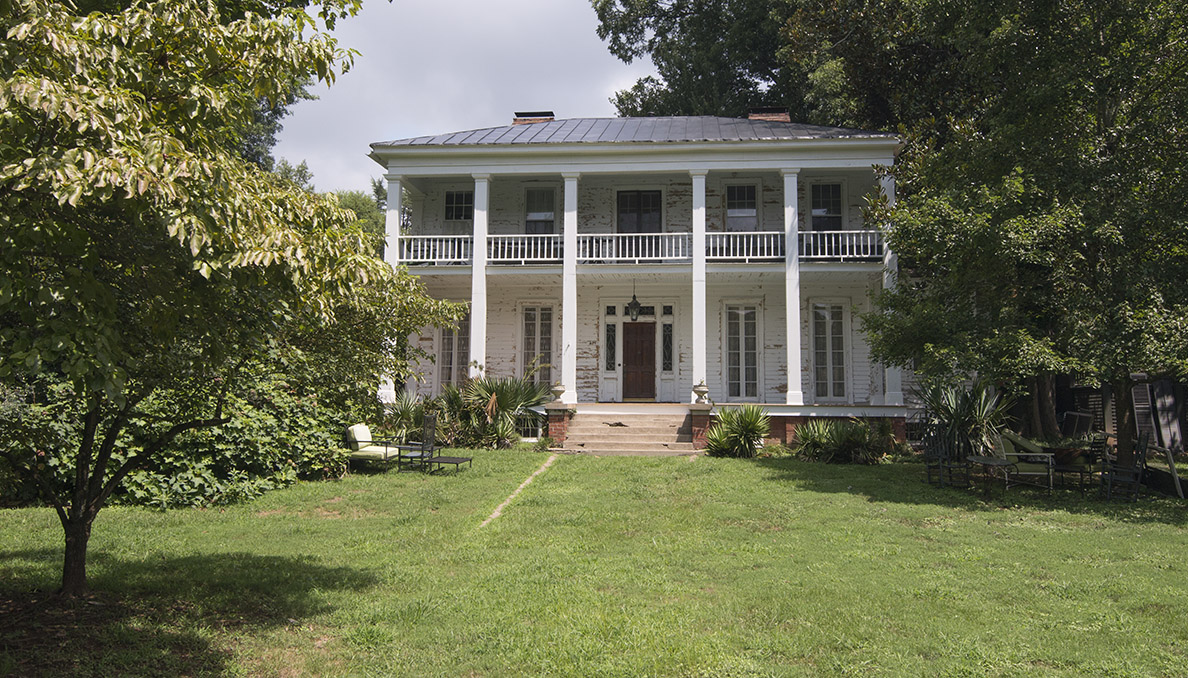 This imposing two-story, hip-roofed frame house with its double front porch resembles a plantation house of the type found in the Deep South, with tall casement windows on the first floor that open out to the porch. The five-bay-wide house has plain weatherboards, a standing-seam metal roof with a wide cornice, two interior brick chimneys, six-over-six wood-sash windows, and double-leaf six-light casement windows across the first-floor façade. The entrance, centered on the façade, is a six-panel door with beveled-glass-over-one- panel sidelights and a beveled three-part transom. The two-story, engaged porch is supported by full-height square columns and has a wood railing at the second-floor level and a double-leaf French door centered on the second-floor façade that opens to the second-floor porch. There is a one-story, hip-roofed wing on the right (south) elevation that is flush with the façade. A full-width, one-and-a-half-story, shed-roofed rear wing has three gabled dormers on the rear (east) elevation. There is a one-story, hip-roofed, wing with an exterior brick chimney attached to the left rear (northeast) corner of the house.

The house was built about 1908 from a design by noted ecclesiastical architect Ralph Adams Cram. The brother-in-law of Mrs. Shepperd (Susan) Strudwick, Cram designed the Neoclassical Revival-style house as a recreation of southern charm. As such, it enhances the eclectic streetscape of Churton Street but bears no resemblance to the piedmont vernacular architectural tradition of early Hillsborough. The house was built on the site of the antebellum [c. 1833] W. J. Bingham House, which was moved down East Union Street. Original owner Shepperd Strudwick (1868-1961) was a local industrialist [owner of the Bellevue Mill] his three sons were artists. The John Kennedys, who acquired the house in the 1970s, gave it the name of "Tamarind."

"In 1950, Walter Carroll, then a staff writer for the Durham Morning Herald, wrote an article appropriately titled - "The Strudwicks - Family of Artists." The Sunday feature told the story of wood carver Shepperd Strudwick and his three sons, portrait painters Clement and Edmund and actor Shepperd Jr.

Ecclesiastical architect Ralph Adams Cram designed the house. [...] Although the blueprints were altered to make the eventual house more Southern, the classical and turn-of-the-century features that remain make the residence more unusual and artistic. For example, the visitor to Tamarind is aware of the six square wooden columns at the front, but may not notice that the two central ones are farther apart than the remaining four. Such spacing allows the columns to line up with the door and windows without making the hall extremely narror or the flanking rooms unncecessarily wide.

The same precise attention to details is also evident in the roof design. In spite of its unusual structure, the standing-seam metal roof, with each seam separately welded, fits the house compactly and adds strength and unity to the lines of the exterior.

The interior is also a combination of many distinctive features. Here the house blends the formal and informal characterisitcs of an elegant but practical residence. The panelled hall, parlor, and library at the front provide the formal touches, and the back portion, with its adjoining courtyard, adds the living quarters required by a family.

In the beginning, the house was designed for a fireplace or stove in each room, but today there are seven fireplaces, each equipped with brass or wrought-iron andirons. Originally there was a single bathroom, one of Hillsborough's earliest.

When Cram designed the high-ceilinged house, he planned to plaster the ceilings, but the senior Strudwick objected because one of his sisters had been struck by a piece of plaster. Perhaps, too, the woodcarver who fashioned crosses for the Presbyterian and Methodist churches as well as stagecoaches and the Uncle Remus characters preferred the warmer qualities of wood.

Throughout the house there are also many other interesting uses of wood which must have delighted him. There are pine floors in main rooms, oak in the more traveled areas, and all of the downstairs room except a bedroom and the butler's pantry are panelled up to the chair rail. The panelling, designed and installed with exceptional care, varies from dark-stained in the front hall to painted softwoods in other areas. All of the woodwork is custom-made too, except around the doors and windows. To avoid what Strudwick considered an unnecessary expense, this trim is turn-of-the-century instead of classical. The leaded glass in the dining room is also of a later period, and some of the woodwork in the hall appears to be.

Even in a town noted for its flowers, trees, and shrubs, the plants at Tamarind are unusual. The ancient beech and an undisciplined wisteria vine which measures five feet in circumference are older than the present house. There are also an enomormous crepe myrtle, huge pecans, and an ancient rose with a crown eighteen inches wide. Susan Read Strudwick loved her garden where a circular brick sundial measured the hours [...]. Today a mammoth old magnolia towers above the south upstairs bedroom window, and in the boxwood garden a stone bench has been inscribed with a line from Poe's sonnet 'To Science' : '... the summer dream beneath the Tamarind tree.' Since Shepperd Strudwick Jr. played Edgar Allen Poe in the Hollywood movie of the poet's life, both the line and the name 'Tamarind' are appropriate."

The Sheppard Strudwick house, built in 1902, was designed by the noted architect, Ralph Adams Cram. The garden was planned by Mrs. Strudwick, and was her greatest pleasure over a period of many years.

Facing the house on the right, there was a flower bed about twelve feet wide and of good length, in which grew such old favorites as Jacob's Ladder, touch-me-nots, iris, peonies, dahlias, and bluebells. Flowering shrubs found a place here, as well as rose bushes of many varieties. There is still a magnificent old bush of the rose, Silver Moon, and, in the hedge on the south side, climbs a delightful, and now rare, little rose, Félicité et Perpétue.

At the north side, a grape arbor occupied a sizeable area, and there is still a large scuppernong vine growing there, as well as a great Wisteria, which makes a glorious cascade of spring bloom. The large beech tree was planted by Dr. Bingham, founder of the Bingham School. The Methodist Parsonage stood on this lot, when it was purchased by Mr. Strudwick. He had it moved east on Union Street, where it still stands.